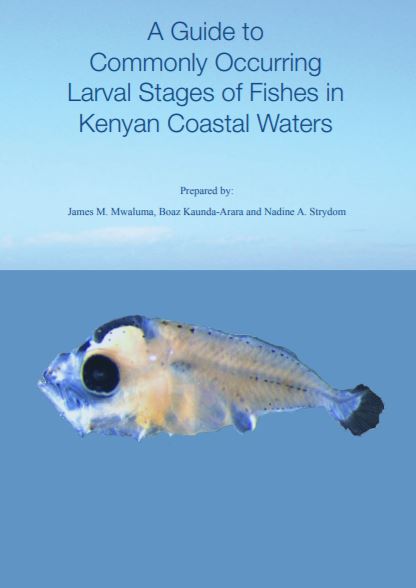 The early life stages of most fish represent developmental intervals that are ecologically distinct from each other and especially from their later juvenile and adult stages. Knowledge of the changing ecological requirements and limitations, population dynamics, and behavior of the early stages of fish facilitates effective monitoring and management of fish populations and their habitat(s). Field research in fish larvae and early juvenile stages depends on accurate identification of, at least, the targeted species among collected specimens. The use of meristic and morphological characteristics for taxonomic identification requires knowledge of the appearance of the targeted species and similar-looking species in an aquatic area to enable diagnostic segregation. Since these characteristics dramatically change as fish grow, diagnosis becomes difficult and complicated. Although taxonomic guides on fish larvae are readily available for other Ocean areas of the world, they are lacking for the Western Indian Ocean (WIO) area. This disparity could, perhaps, explain the paucity of work on the dynamics of marine fish larvae from the WIO area despite the importance of such studies towards understanding the factors that affect population changes. As such, this guide, the first of its kind in the WIO region, will be of interest to marine scientists. Due to the high diversity of fish species in the WIO region a description of their larvae is both challenging and daunting. Nonetheless, the authors of the guide have put in commendable effort by describing the larvae of over 40 genera in 37 families of marine fishes. Of great importance is that the guide has been designed to allow investigators, even those with limited taxonomic experience, to identify the larvae commonly encountered in the Kenyan coastal waters. The specimens have mostly been described to the genera level which displays a necessary caution given the difficulties that exist in taxonomic identification of such stages to species level; a task that other investigators can pursue. The guide, therefore, not only fills an existing gap in taxonomic material necessary for identifying various stages of marine fish larvae in the WIO area, but will also facilitate studies in marine fish larval ecology.

Country/Region of Publication:
Kenya
Share
← Back to Publications Full Report