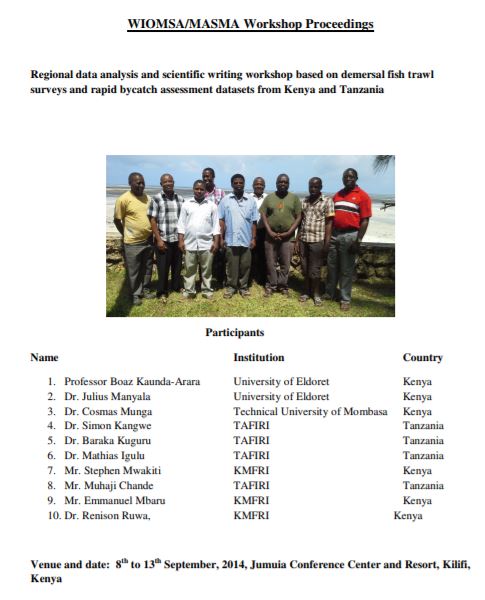 The workshop was officially opened by Prof Kaunda-Arara (the convener) who welcomed the participants. Members introduced themselves by giving their names and roles in the concluded South West Indian Ocean Fisheries Project (SWIOFP) cruises that generated the data which formed the subject of the workshop. The convener went through the agenda and programme for the workshop. There were suggested amendments and subsequently the agenda was adopted as in Annex 1. The Convener, made the opening remarks by going through the various sections of the proposal. The main justification for the workshop proposal was to provide a forum to analyze SWIOFP datasets generated during 2012 given that this aspect was not provided for during the SWIOFP implementation period. The objectives of the workshop were then reviewed as contained in the proposal.
The main outputs for the workshop will include:
1.Three scientific papers
2.A workshop synthesis report with recommendations
3.A workshop process report to WIOMSA, immediately after the workshop