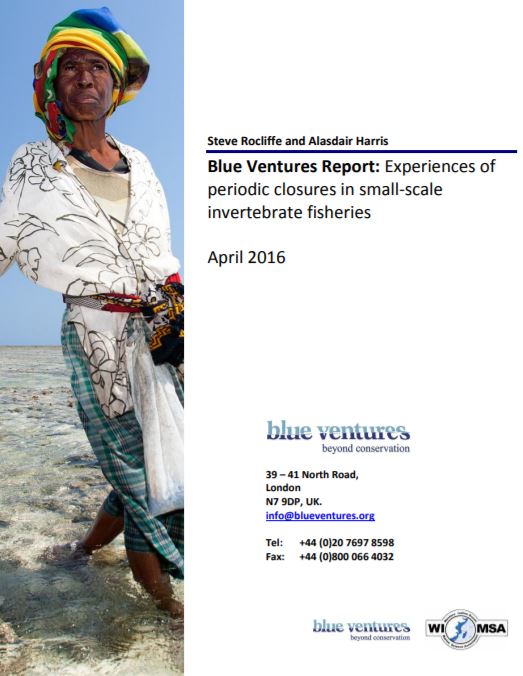 Periodic closures, which are also known as temporary, short-term, rotational, periodically harvested, or non-permanent closures, temporarily ban the harvesting of marine resources in specific areas (Cohen and Foale, 2013). Use of such closures is increasing in community-based management initiatives across the Indo-Pacific and is supported by a growing evidence base (Cinner et al. , 2006; Bartlett et al. , 2009; Cohen and Foale, 2013; Oliver et al. , 2015). In the Western Indian Ocean, interest in periodic closures has largely centred on their use in the management of reef octopus Octopus cyanea , a regionally important species that is both consumed locally and sold for export to southern Europe (Humber et al. , 2006; Moreno, 2011). Closures began in Madagascar in 2003, typically cover 25% of a community’s overall octopus fishing grounds and are in place for 2-3 months at various times of year. The apparent success of early closures led to other communities following suit, and as of October 2015, more than 250 closures have taken place. To help strengthen and support these efforts, this report uses a case study approach to examine experiences of short-term closures for artisanal invertebrate species other than octopus across the Indo-Pacific.
•  Periodic closures are a commonly used management tool in many parts of the Pacific, especially countries with a tradition of customary marine tenure (CMT) – the right to control access to fishing grounds at the local level. In this context, most closures are used to manage multi-species reef assemblages, though there is little empirical support for doing so.
•  In a Western management context, periodic closures have been used for benthic invertebrates such as trochus, scallops, urchins, lobster, coral and abalone. Here too, results have been variable and there is presently little consensus on the effectiveness of the approach from field studies.
•  Evidence from modelling studies and preliminary empirical research in New Zealand is more instructive and suggests that longer-lived, slower-growing species will need longer periods of closure for benefits to accrue than faster-growing, shorter-lived species and that periodic closures are generally better suited to short-lived, fast-growing species.
•  In tropical artisanal fisheries, periodic closures have also been used to manage single invertebrate species such as octopus (Octopus cyanea ), trochus (Tectus niloticus ), mud clams (Polymesoda spp. ), mud crabs (Scylla serrata ) lobster (Panulirus spp ), and blood cockles (Tegillarca granosa ).
•  Evidence from the case studies discussed here suggests that periodic closures can be a successful management strategy for small-scale coastal invertebrate fisheries, improving food security and delivering positive economic benefits to low income fishing communities.
•  It is difficult to determine the key factors that underpin a successful periodic closure system for small-scale invertebrate fisheries because approaches are highly varied, even between closures aiming to manage the same species (e.g. trochus).