An Economic Analysis of Milkfish Farming in Tanzania: Potential for Economic Development and Policy Issues 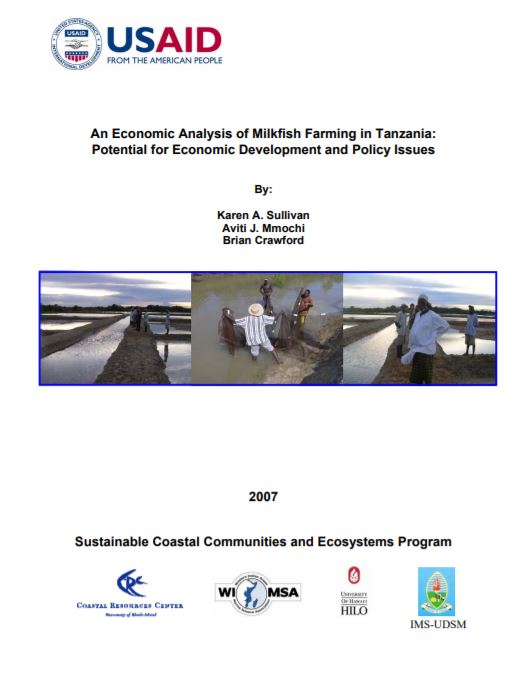 The purpose of this economic analysis is to examine the costs and potential returns of constructing and operating a commercial milkfish pond in Tanzania in order to determine the economic feasibility of commercial production. The paper provides an overview of the basic steps in milkfish farming followed by two actual case studies. Several methods were used for collecting the information used in this analysis. First, existing information from previous reports (Requintina et al. 2006) were used to identity the construction and operating costs of a 1-hectare milkfish pond, the estimated productivity, the estimated cash flow and issues associated with marketing milkfish in Tanzania. Cost and productivity information in Requintina et al. (2006) is based on trials conducted at a 1-hectare milkfish pond site at the Kirago salt farm in Mkuranga District. Additional information was collected directly from key informants at a second trial milkfish pond site operated by Regent Enterprises in Bagamoyo. In cases where direct information of costs or earnings was not available at either of the locations several assumptions and general estimates were made to fill the gaps so that a complete and thorough analysis of both sites could be made. This report then compares the estimated costs and returns at these sites and discusses the implications with respect to economic and marketing feasibility of milkfish farming in general. Policy issues to promote milkfish farming are also discussed.