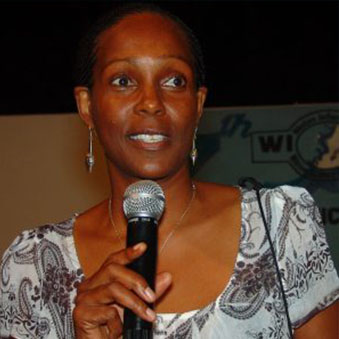 Nyawira Muthiga holds a PhD from the University of Nairobi. She is the Director, Marine Program Kenya and Conservation Scientist at the Wildlife Conservation Society (WCS). She worked at Kenya Wildlife Service (KWS) from 1999-2003 as the Head of Coastal and Wetland Program and working her final year there as Assistant Director, Coast Conservation Area.

Dr. Muthiga is the longest serving President of the Board of Trustees of WIOMSA, having served in that capacity from 2000 to 2009. During her tenure, she presided over the Association’s rapid growth, overseeing the development of a new strategy for WIOMSA and the Association’s Resource Mobilization Strategy. She was involved in the strengthening of WIOMSA country chapters and networks, and improved information dissemination and management training activities.

She has served on the boards of various marine conservation and research bodies such as Kenya Marine Fisheries Research Institute, Kenya Maritime Authority and World Fish Center. She is a member of the Synthesis Panel of the GEF/WB Coral Reef Targeted Research and Capacity Building for Management Project; the Regional Coordinator since 2007 World Commission on Protected Areas (WCPA) – Marine, a member of the working group of the National Center for Ecological Analysis and Synthesis (NCEAS) of the University of Santa Barbara; the Chairman ,Kenya Sea Turtle Conservation Committee (KESCOM); member and Chair of the Coral Reef Task Force , the Kenya representative since 1996, to International Coral Reef Initiative (ICRI) and a is a member of the Global Coral Reef Monitoring Network (GCRMN) Scientific and Technical committee.

Dr. Muthiga has contributed immensely to the development and conservation of Marine Science in the region. She has improved the management of MPAs through the development of management plans, and awareness and training programs at KWS. She has contributed to the strengthening of MPA management skills in the region through various roles including contributing to a regional Manual for MPA managers and a Guide for MPA Management in the Western Indian Ocean produced by WIOMSA. Through KESCOM, Nyawira has contributed to strengthening community based conservation organizations. As Chair of the Coral Reef Task Force of the Nairobi Convention, she oversaw the development of a regional strategy for the management of coral reefs focusing on climate change mitigation. She coordinated with WIOMSA and KESCOM a regional workshop that culminated in the establishment of the Marine Turtle Task Force of the WIO under the umbrella of the Nairobi Convention and the Indian Ocean South East Asian MOU for marine turtle conservation.

She has authored and co-authored more than 40 scientific articles, books and book chapters and has supervised several local and foreign MSc and PhD students.