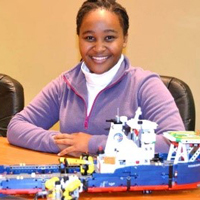 Tania Duba is a science-and-society project leader at the South African Environmental Observation Network (SAEON). Her responsibilities include the development and implementation of the science engagement program, performing research, educational outreach, and writing newsletters. Trained as a physical oceanographer from the University of Cape Town with an MSc titled “Climate and environmental change along the east coast of South Africa: a perspective from local marine resource users and scientific efforts”. Her interests include air-sea interactions, coastal climate processes, local knowledge, and community development. In 2018, she received a post-graduate certificate in interdisciplinary research and ocean governance from São Paulo School of Advanced Sciences in the University of São Paulo and joined the Transdisciplinary research working group of the African Climate Development Initiative (ACDI). Tania Duba enjoys teaching and learning about the marine environment.  She has played part in the development of the Marine Science school’s curriculum in South Africa. Tania has committed herself to be part of the WIO ECSN from 2017 as a country coordinator for South Africa.