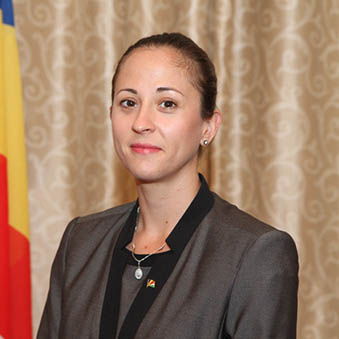 Ms. Loustau-Lalanne is the Principal Secretary in the Vice-President’s Office of the Republic of Seychelles.  She brings a multi-dimensional perspective to the WIOMSA board through her previous work as Principal Secretary for the Blue Economy Department in Seychelles, her experience as a First Secretary in the Multilateral Affairs Division of the Ministry of Foreign Affairs in Seychelles, and her work with the United Nations Development Programme  (UNDP) Sub-office in Seychelles. She hopes to strengthen the work of the Board and in particular with its endeavour to establish a stronger science-policy link.

Ms. Loustau-Lalanne obtained a Bachelor of Arts (BA) in Politics, International Relations and Philosophy from Middlesex University, United Kingdom in 2003 and started work at the Department of Environment as a Project Officer in 2004 (until 2007) in establishing an International Conventions Unit (ICU), which coordinated the implementation of various environment-related development projects in the country. From 2008-2010, she worked as a Programme Officer for the United Nations Development Programme (UNDP) sub-unit in Seychelles which had the main task of implementing all the national projects under the UNDP country portfolio, ranging from social welfare, good governance and sustainable development projects. In January 2012, she started work with the Ministry of Foreign Affairs as First Secretary in the Multilateral Affairs Division, overseeing a diverse range of dossiers including membership to the Commonwealth, United Nations Environmental Conventions, and Small Islands Developing States (SIDS). In February 2015 she was appointed Principal Secretary for the Blue Economy Department in the Ministry of Finance, Trade and the Blue Economy, and subsequently transferred to the Vice President’s office in December 2016 with the same portfolio. In January 2018, she was appointed as the Principal Secretary for the Office of the Vice-President of Seychelles.